We did some research and there are only 26mill shares outstanding in APGS, and there seems to be very little resistance at this price point (55 cents) which indicates a run up the charts for early birds. Will you get in early?

It should be on your radar if it’s not already!  Today’s news has investors all over it!    Check out the chart below and look into APGS it appears to be a very hot stock right now!

Most cell phone “apps” only cost $1 or $2, but that low price point has turned these little novelty programs into a near-$2-BILLION craze among the same kids that would otherwise spend those dollars on iTunes or ring tones or video games.

Christmas is right around the corner and that means millions will be acquiring new mobile devices such as I-pads, Tablets & Smart Phones.  By the end of 2012 it is expected that over half of the U.S. population will own a smart phone.  Apple, Sony, HTC & Samsung aren’t the only companies that are going to benefiting from the holiday sales season. The apps industry is one of the fastest growing multi-billion dollar industries worldwide.  With that being said, let’s put Apps Genius Corp (APGS.OB) on our radar for Thursday.

APGS is fairly new to the market and has yet to have any fairly significant trading days.  This is a ground floor opportunity!

APGS SnapShot:  Look at the trend for mid-Sept. 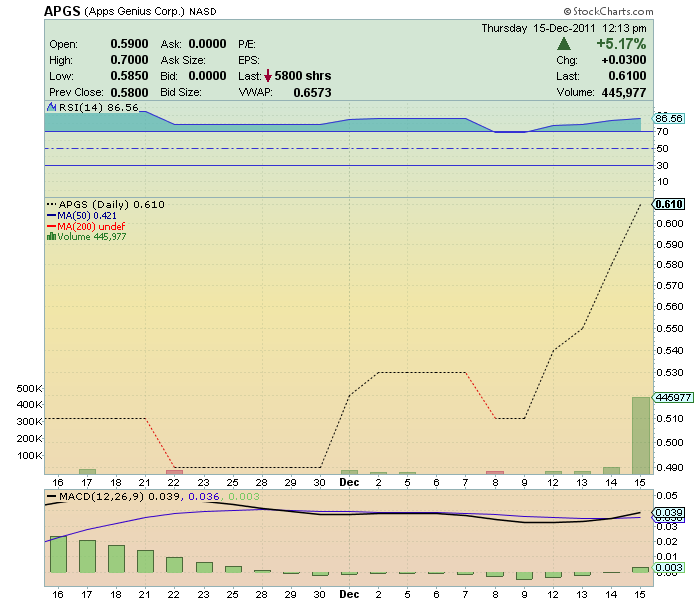 What caught my eye was the press release that they put out on last Thursday.

This news announcement definitely has set the stage for more news to follow in the future. 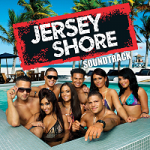 Right here and now, there are maybe 6 million Jersey Shore fans and the app retails for about $2 per download and while Snooki herself gets a hefty share of the gross, there are only 26 million APGS shares on the market.

Celebrity apps are taking off and celebrities everywhere are using them to help launch and enhance their career.  Samuel Jackson, Lady Gaga, Britney Spears & Chuck Norris are just a few celebrities who have extremely apps selling right now.

APGS already has their first app for sale on ITunes.  You can purchase it here:   http://itunes.apple.com/us/app/snookify-me/id461014734

“Snookify Me” is the first of 8 apps to be developed and endorsed by Nicole “Snooki” Polizzi.

APGS may be on to something here.  Snooki’s fellow cast star from The Jersey Shore, Mike “The Situation” had one of ITunes top 10 grossing apps during 2010: http://www.minyanville.com/dailyfeed/jersey-shores-the-situation-has/

Snooki certainly has more notoriety and is far more popular than “The Situation” and has been signed to star in her own show on MTV in 2012.  She is even the face for Dr. Siegal’s Cookie Diet which has become a huge fad here in America.

Apps Genius Corp’s goal is to develop and publish new titles on a recurring basis that are based on the same property and gaming platform. Examples of this franchise approach are ‘My Mad Millions’ and ‘Rock The House,’ currently under development, which both utilize the same underlying platform. A core focus of the Company’s Social Gaming and Mobile Application development is to allow users and players to reach across different networks into a virtual application or gaming environment such as Facebook, MySpace, iPhone and Android and be able to play games and use applications from all users no matter what environment they are using the application in.

We expect all eyes will be on Apps Genius (APGS) in the near future, more positive news could send this one flying up the charts.

You’d have a hard time trading Zynga before its IPO, but you can finally trade APGS now.

If the “Snooki” app has created this much buzz in the first three weeks since its launch, imagine where APGS goes from here.

Now that APGS is on the move for the first time in ages, it doesn’t hurt to get it up on your screen…right away!

If you answered yes, then receiving Aim High Profits’ Penny Stock Alerts will help guide you to some of the biggest and most profitable trading alerts and techniques that are proven to bring in the “big bucks”.