George Soros: The Billionaire Who Broke the Bank of England

“If investing is entertaining, if you’re having fun, you’re probably not making any money. Good investing is boring.”

At the young age of 13, George Soros survived the Nazi regime’s invasion into Hungary during World War II sparingly due to his family’s wise decision to assume false identities to avoid deportation to concentration camps. Son to an attorney who had survived as a prisoner of war in World War I, Sandor Kiss (George Soros’ assumed name to protect his identity and religion) and his father assisted in the saving of persons who were to be deported to these death camps. With the constant fear of death pumping through his veins until the Soviet Union finally removed the Nazi regime from Hungary in 1945, George Soros decided, at 16 years of age in 1947, to further his education by embarking for London.

“I’m only rich because I know when I’m wrong…I basically have survived by recognizing my mistakes.”

In 1952, Soros graduated from the London School of Economics in 1952 where he was influenced greatly by Karl Popper and his book The Open Society and Its Enemies. His interest in Popper led him to the development of his theory of reflexivity, which Soros says has guided him both as an investor and a philanthropist. With his education and influence in hand, Soros launched his historic career in the mid 1950’s by scoring a position as an arbitrage trader at the merchant bank Singer & Friedlander.

“Markets are constantly in a state of uncertainty and flux, and money is made by discounting the obvious and betting on the unexpected.”

Specializing in arbitrage trading of foreign securities, Soros, at 26 years old, made his mark on Wall Street when he sailed to New York to begin working at the brokerage firm F.M. Mayer.  It did not take long for Morgan Stanley to become one of Soros’ many prestigious clients.  From there, tours to the investment firm Wertheim & Co. and Arnold & S. Bleichroder where worked until 1973. During his time at Arnold & S. Bleichroder, Soros used $100,000 of the firm’s capital as seed money to establish the First Eagle Fund which was such a success that it helped him build valuable relationships within the investment community.

“Stock market bubbles don’t grow out of thin ai They have a solid basis in reality, but reality as distorted by a misconception.”

By 1973 with his own hedge fund with $12 million with money from investors which was initially called the “Soros Fund” after leaving that same year from Arnold & S. Bleichroder. The Sorosa Fund would eventually become the Quantum Fund which in 2000, as part of the Quantum Group of Funds, was restructured and gave birth to the Quantum Endowment Fund. Soros Fund Management LLC and its Chairman George Soros are the principal advisors to the Quantum Endowment Fund which manages roughly $27 billion. Soros Fund Management has $18.1 billion under management as of January 1, 2012 according to www.hedgestats.com. 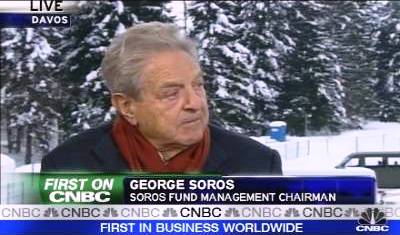 – In the summer of 1988 France’s new government under Socialist Francois Mitterrand was calling on investors to buy shares in newly privatized French companies. Soros, like many investors, was looking into purchasing shares in a basket of those mostly undervalued entities. In the fall of 1988, one of his advisors was contacted by a French businessman attempting to assemble a group of investors to purchase shares of Société Générale, one of the oldest and largest banks in France.

The advisor reported to Soros that the information he received from the businessman was ambiguous and the plan implausible. Soros decided not to participate, never in fact meeting the businessman or signing a confidentiality agreement. He continued with his original plan and instructed his traders to purchase a limited number of shares in a basket of four French privatized entities, including Société Générale.

Soros had received no information from the Société Générale itself and had no contact whatsoever with it. However, the French stock exchange regulatory authority (COB) raised the question of whether his knowledge that a group of investors was planning to buy a large number of shares in the company constituted insider information. After conducting a thorough investigation the COB concluded that no charges should be brought against Soros, because the statutes, regulations and case law relating to insider trading did not sufficiently or clearly establish that a crime was committed.

Despite that conclusion, several years later a Paris-based prosecutor filed charges against Soros and two other French businessmen. The two other defendants were acquitted, but Soros was convicted of insider trading in 2005 by the Court of Appeals.

The French Supreme Court confirmed the conviction, but reduced the penalty to €940,507.22, the minimum sentence.

On August 31, 2010, the European Court of Human Rights accepted Soros’ complaint that the conviction violates a key tenet of European law, that no person may be punished for an act that was not a crime at the time it was committed.

On October 6, 2011 the European Court of Human Rights decided 4-3 against Soros.  The three dissenting Judges issued a strong written dissent. Under the rules of the Court, this decision is not a final decision and is subject to an appeal to the Court’s Grand Chamber.

– George Soros is must famous for having taken down the Bank of England. In 1992, with the economy of the United Kingdom in recession, Quantum Fund’s managers anticipated that British authorities would be forced to break from the European Exchange Rate Mechanism (ERM) then in force and allow the British pound to devalue in relation to other currencies, in particular the German mark.  Quantum Fund sold short more than $10 billion worth of pounds sterling.

On September 16, 1992, later dubbed “Black Wednesday,” the British government abandoned the ERM and the pound was devalued by 20%.

– In 1997, as economies were crashing across Asia, Malaysian Prime Minister Mahathir Mohammad attributed the crisis to currency traders, in particular George Soros, and called for such trading to be banned.

The Quantum Fund had not been involved in selling Malaysian currency during or for several months prior to the crisis, however, and in 2006 Mohammad acknowledged that fact and publicly apologized to Soros.