It’s Friday, the markets are closed, there’s no work tomorrow which means that Americans will contribute tonight to the 152 million monthly hangovers. Tomorrow, those who are suffering may want to consider running down to the local convenience store to get one, or two, of Hangover Joe’s (HJOE) The Hangover Recovery Shot. They just promoted themselves via an 8-K filing mid-session on Friday. If you like it, (the shot, not the hangover) take a good look at HJOE stock which we profiled when it was just 0.07.

In 2011 while at a Nightclub Bar and Show in Vegas, the Company was approached by a veteran licensing expert who was attracted to their exhibit. This led to Hangover Joe’s becoming an officially licensed product by Warner Brother’s consumer products division in July later that same year. Encompassing it’s brand recognition around the “The Hangover” movie franchise, the Company redesigned its packaging and promo materials around the theme and characters of the movie.

Following the September, 2011 launch and through the end of 2011, Hangover Joe’s booked roughly $300,000 in revenues across 15,000 stores. Since the start of 2012, the Company has added 12 new beverage distributors who are ordering one pallet, valued at just under $10,000 each, followed by 2-3 pallets per month once they are fully active. 8 of those ditributors were added in the last 2 months.

Based on the projections, Hangover Joe’s looks to book around $1.8 million in revenues in 2012 with a gross profit of around $730,000, or 40%. Projections are for sales to top $7.5 million next year and reach nearly triple that, $21 million in 2014. The recent distributor agreements for Canada and Australia will account for roughly $2.5 million of 2013 projected sales.

HJOE is no joke. The Company’s President and CEO, Michael Jaynes, is a former trial attorney who recently ran his own firm and worked for the Tennesee Supreme Court as an assistant public defender. Tennessee, the home of Whiskey maker Jack Daniels and the place where you father could also be your brother or uncle, it’s safe to say that Jaynes has had to sober up a client or two prior to a court hearing and knows The Hangover Recovery Shot is a winner. 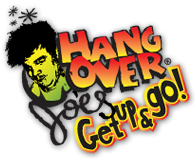 Bottom Line: HJOE is one penny stock anyone who sees value and long-term gains like the ones Monster Energy (MNST) gave investors must own, big and long. The next sequel to the movie franchise, “The Hangover”, is currently being filmed and due out in summer, 2013. Drink responsibly and trade responsibly means drink, but don’t puke in your friends car and get some HJOE in your portfolio before it breaksout.