Shares of mineral resource exploration OTC penny stock Titan Iron Ore Corp. (TFER.OB) closed at $1.04, down -2.8%, in the last trading session. At one point in the afternoon, shares were trading as high as  $1.23 after having dipped to a price below $1.00, 95 cents, in the early morning session. A much more flat trading session, ZERO shares traded, was experienced by shareholders of Pacific Copper Corp. (PPFP) which shares more similarities than CEO Andrew Brodkey would want any shareholder of TFER to know.

Even though the company announced results from drill hone SC2011-03 of its winter, 2011 drilling program at the Strong Creek iron-titanium project, could Friday be the last time the share price of penny stock TFER trades above the $1 level?

Subscribe today and get our next stock alert delivered to your inbox FREE.

RSI, MACD, Share Price and MFI are all trending downwards. If not for the rise in volume, there wouldn’t be any positive comments to be make about TFER‘s stock chart.

The company has an unsustainable market capitalization of $51.73 Million on TFER has a 52 Week High (2/21/2012) of $1.81. The stock will more luck to ever get back to that high than a ’57 Chevy owner would need to find original spare parts in Havana, Cuba.

There are 3,700,000,000 shares of common stock authorized and only 49,737,000 issued and outstanding as of the quarter ended Sept. 30, 2011. It will surely be a shocker when the company does file its next earnings report to see how many are now outstanding considering that a number of insiders received anywhere from 400,000 to 1 million options at the end of 2011. 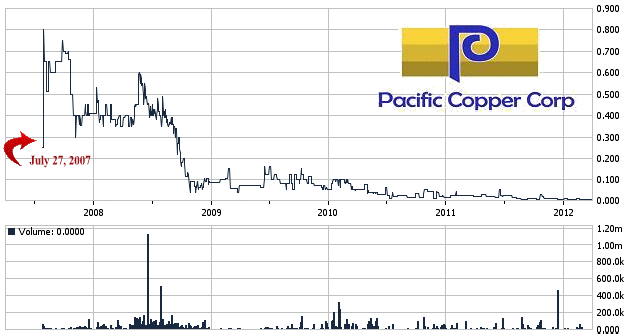 On March 21, PPFP announced that the British Columbia Securities Commission revoked its “Cease Trade” order issued on the 8th of March since Pacific Cooper properly filed its required annual financial statements for its financial year ended October 31, 2011. Perhaps this is why TFER filed with the SEC the Notification of inability to timely file Form 10-K; you can only do so much work in that small location where two mining exploration companies are based out of.

Titan Iron Ore’s SEC filings reported a sale to two non-U.S. investors of 1.3 million “units” for $1,000,500 which is how the company is surviving; through sales of one share and half a share warrant for $0.75 each.

The only real thing the penny stock is currently doing is issuing press releases about their winter 2011 “test” drill program and further diluting their stock. Between the shares sold in “units” and the options handed out to TFER insiders, there is plenty of air in the air compressor to keep this afloat for quite a while before flushing.

Bottom Line: Even if the penny shares of TFER don’t surpass the level they traded at on Friday, the stock is most likely going to stick around until they can max out the hamsters churning the wheel before Titan Iron ore ends up looking like its roommate.

TFER last reported earnings back on November 15th, 2011 (see here). They were supposed to file in late February for Q4 then it was rumored to be late March. Funny isn’t it that they filed a NT 10-K instead of showing how ugly the financials really are, audited or not. If April 1st was a weekday, perhaps they would have filed then.