The Hot Stock for Friday, SELR

Steele Resources Corporation (the “Company”) (OTCBB: SELR.OB) is pleased to announce that it has completed its development goals for 2011 and established 166 foot development drift that will serve as the main haulage for future mining activities at the Mineral Hill Gold Mine.  The Company has also begun an advanced drilling program that will better define the targeted mineralized zone and provide the Company’s geologists and management with additional data.

Company CEO Scott Dockter stated, “We have accomplished a lot this year and we are aggressively moving towards further development of this mine.  Having a thorough understanding of this project is critical to efficient operations and this drilling will enable us to effectively develop this potential gold resource.  Over the next two weeks, we will be looking to define production targets for 2012 and to explore the potential for additional mineralized zones.”

The Company plans to drill four test holes, each to a depth of 200 feet.  These holes will examine the possibility of mineralized contacts between the current development drift and the known mineral targets expressed at surface.  This drilling activity will also provide additional data relating to the potential depth of mineralization at the mine site.

Results from this drilling are anticipated shortly after the New Year Holiday.

Steele Resources Corporation is a precious metals exploration and development company that is working to become an active gold producer through the development of the 1800 acre Mineral Hill Gold Project.  The Company recently announced it had begun to drive a development drift towards the target mineralized zone.

Hard to believe SELR was trading at a lowly 1 to 2 pennies a share in late September, but once the press releases started flying fast and furious, this stock ramped up to a new base. 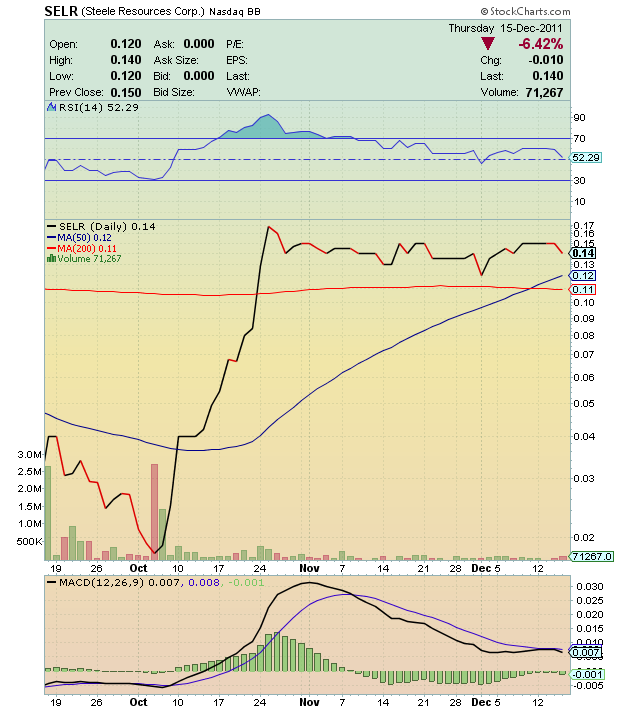 With brief exceptions, SELR hasn’t dipped below 12 cents in the last six weeks!

The excitement actually started building back in July when SELR took 100% control of its 1,800-acre lead project, Mineral Hill, for the equivalent of just $540,000.

Steele Resources Corp. (SELR) has spent the last few months transitioning from gold “development” to outright gold production — and traders have come running for their piece of that bullion!

And as you can see from the chart, it’s a moment when everything changed for SELR. This is an all-new ball game!

The excitement actually started building back in July when SELR took 100% control of its 1,800-acre lead project, Mineral Hill, for the equivalent of just $540,000.

At the time, Mineral Hill was only worth maybe $1.6 million — not a bad score at all when you consider that SELR was literally trading at pennies a share at the time.

Mining giant Barrick Gold itself has already started processing the roughly 10,000 tons of ore lying around on SELR’s acreage while the company tackles its higher-grade rock.

All in all, SELR expects to start full-scale production “by the end of the year,” at which point its rock will be worth 1/5 of a precious ounce of gold per ton.

SELR’s transformation has already helped it deliver a 900% wad of cash for those who bought in at the October 5 bottom, but more recent news makes me suspect this company’s just getting started.

Just a few days ago, SELR cut into what it describes as a “massive” vein of ore — 40 feet wide, 138 feet down — with the potential to host even higher-grade gold than historical miners dug.

We don’t know exactly how big the strike is yet, but if SELR was worth $0.15 a share before, it stands to reason which direction this NEWS is likely to push the needle!

SELR is a Must Watch For Friday and Beyond!

If you answered yes, then subscribing to Aim High Profits’ Penny Stock Alerts will help guide you to some of the biggest and most profitable trading alerts and techniques that are proven to bring in the “big bucks”.