Sauer Energy, Inc. (SENY) gave a solid double-digit payday about a month ago, and that was before the company confirmed that its products are finally moving toward the market. If SENY made you money last time, you probably recall the basic proposition: lightweight windmills small enough to mount in your yard and efficient enough to cut 25% off the typical American family’s power bills.And now, recent developments have set SENY in motion again! 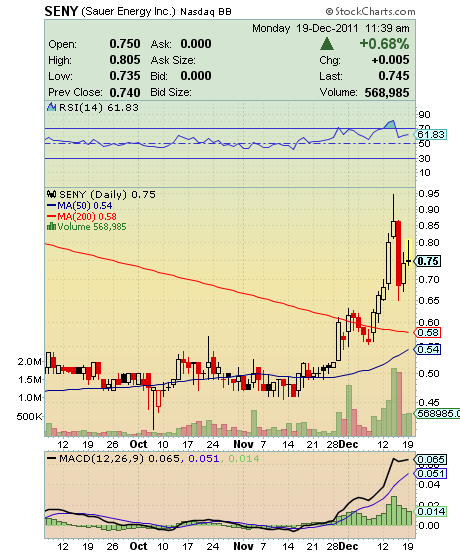 SENY is finally moving toward its commercial payday!

The entire market spent months waiting to hear that SENY had started making their turbines…so we nearly flipped last week to see this buried in the company’s annual report:

“The first resin composite blades have been received from VEC Technologies, LLC as promised and to specifications. The other components of our products are available from several sources as prices we deem reasonable.”

In other words, SENY might be manufacturing its first turbines even as we speak — and that’s news traders, eager distributors and even the energy-conscious public have been waiting to hear for MONTHS.

As far as we know, the goal is still to get those windmills into stores in the first quarter of 2012, which starts in a few days…so SENY’s news flow may just be beginning.

Barely two weeks ago, SENY got the wheels turning faster by buying a rival company – City Windmills, Inc. –– in order to get its government contracts and “aggressively expand” its operations.

Executive giants sign up with SENY to get their taste

And as a bonus, SENY is getting Roland Bopp in the deal…and this show of confidence from Bopp is a big, big deal indeed.

He has his pick of companies to run…but he’s going with SENY.

Speaking of SENY fans, CEO Dieter Sauer himself has kept a tight grip on 38 million shares, or about 1/2 the total float.

Maybe he’s so possessive because he knows that “small wind” power — which is how the experts define any installation that lights fewer than 10 houses — has already become a $139 million business, growing at a rate of 53% a year!

As it is, commercial and academic engineers, not to mention $12 BILLION “green” utility Edison International, have definitely been showing plenty of interest in SENY’s unique turbine design.

Maybe Dieter sees a bigger deal ahead for SENY where the acquirer becomes the “acquired.” Traders definitely aren’t ruling that out!

Bottom Line: SENY has made its share of money for our subscribers in the past and is back on our radar today.

If you’ve been holding back and missing the fun, don’t you think it’s time you took a look at SENY?

If you answered yes, then subscribing to Aim High Profits’ Penny Stock Alerts will help guide you to some of the biggest and most profitable trading alerts and techniques that are proven to bring in the “big bucks“.