Yesterday Wikipedia, WordPress and other websites blocked access to content in protest against US anti-piracy bills. Whether Congress passes or vetoes SOPA and/or PIPA, one company who may benefit from a passing of the bill is Crown Media Holdings. With over 87 million subscribers to its “bread and butter” revenue maker, Crown Media owns and operates pay television channels in the U.S. and Puerto Rico.

With The Martha Stewart Show and everyone’s favorite “Rajun Cajun” Emeril Lagasse highlighting the Hallmark channels premiere shows, it’s no wonder that revenues jumped 18% to $74 million in the third quarter lining the $223.8 million reported revenue for the 9 months ended September 30, 2011. One main line item which highlights why CRWN is such a good stock to buy now is that Adjusted EBITDA was $23.7 million for the third quarter of 2011 compared to $10.0 million for the same period last year.

Based in Studio City, California, Crown Media Holding’s stock is traded under the symbol CRWN on the NASDAQ and has 170 listed full time employees. 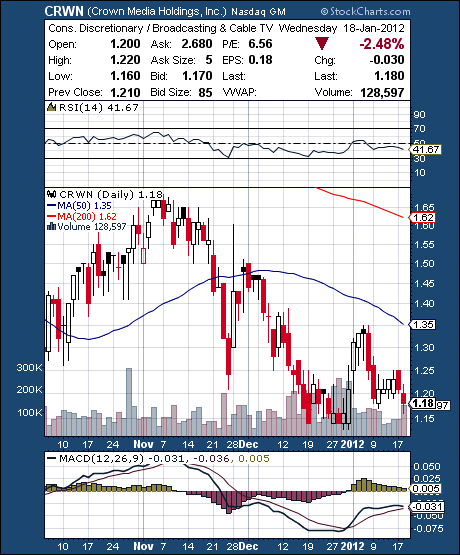 It’s been a rough couple of days for the stock, losing – 7.52% over the last few days but with a short float at 14.43% which equals 40.83 days of average volume, CRWN is a candidate for a short squeeze.