With tensions rising in the Strait of Hormuz, the European Union is readying its toughest action to date against Iran as are many of Wall Street’s major Investment houses on the notion that 20% of the World’s Oil could become undeliverable. While India and China have recently brushed off any political persuasion to ban Iranian Oil Imports, the European Union’s proposed ban would be huge as it imported roughly 600,000 barrels of Iranian oil per day in 2011 making it a key market alongside India and China.

Goldman Sachs believes oil prices could “spike” with “massive upside” but expects Brent crude to average $120 in 2012 but end the year high at $127 per barrel, a 14% increase over Brent crude’s current price of $111 per barrel. All of this chaos could result in a huge benefit for an oil and gas company which on Thursday, January 19, 2012, declared a $4.25 semi-annual dividend for its preferred stock shareholders, SandRidge Energy (NYSE: SD).

AimHighProfits.com first alerted about Sandridge on October 5, 2011 at only to be followed 5 days later by infamous investor George Soros. SandRidge is one of those commodity stocks that everybody wanted a piece of back in 2008 when SD generated just under $1.2B in revenue and doubled from close to $30 to over $60 only to crash with oil prices to under $10. Although $60 is far-fetched to see SD trading at again, it is expected to post $1.4B in revenue for 2011 when it reports earnings in February and estimates $1.6B for 2012. Revenue is one thing but earnings are what matter most and SD is expected to break-even for 2011 after some tough losses in previous years.

But let’s not forget that SandRidge successfully transformed from a company focused primarily on natural gas three years ago to one which approximately 80 percent of its 2011 revenues will stem from oil and had dedicated essentially all of its 2011 drilling budget to oil. SandRidge Energy, Inc., an oil and natural gas company, generates its revenue from exploration and production from the Permian Basin, Mid-Continent, West Texas Overthrust, Gulf Coast and Gulf of Mexico. Sandridge signed a $1B deal with Spain’s Repsol YPF SA in December, 2011 to develop a pair of oil fields in the U.S. With Repsol committed to funding $750M for the development project of the company’s Mississippian oil fields, Sandridge is to receive $250M from Repsol for their 16% stake on the Oklahoma/Kansas border as well as 25% stake in the west Kansas acres in early 2012. When this news broke, SD share price closed at $8.21.

Based in Oklahoma City, Oklahoma, SandRidge Energy’s stock is traded under the symbol SD on the New York Stock Exchange (NYSE) and has 2,192 listed full time employees. 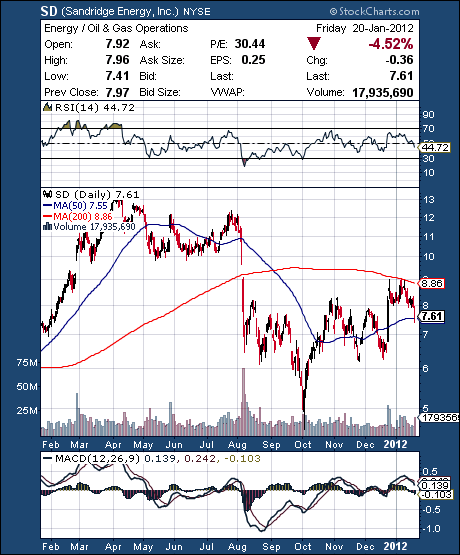