Remember a year ago when OceanFreight, (Formerly OCNF) was to be delisted from the NASDAQ since it couldn’t trade over $1?

DryShips came in and acquired them and traders saw a 3,400% Profit in 7 months.

Shipping stocks have taken traders on an extremely wild ride this year, and Winland Ocean Shipping Corp. (WLOL) has been head and shoulders above the pack.

Over that same period, the Guggenheim Shipping ETF SEA has sunk 9% as some of its big bets went bust.

What gives WLOL its edge?

We’ll explain after you see that outperforming chart!

Accumulation soared to its highest levels EVER in the recent volume spike as traders grab 400,000 shares of WLOL at a time.

That recent mountain of turnover represents a full 75% more buyers than sellers since Thanksgiving. Talk about “filling their plates!”

MACD has been leading signal since mid-November and finally broke above zero on Friday. Positive trending and now upward momentum.

STO would be extremely high for just about any other stock, but WLOL has routinely hung out at 100 for weeks on end.

RSI confirms what the other indicators are saying: bullish power, and this gauge looks nowhere near “overbought.” 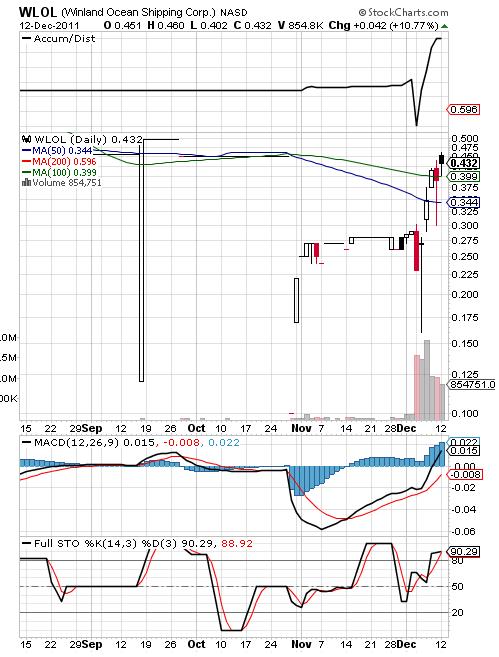 WLOL has conquered all the short-term trends and has been testing the 100-day line since Thursday.

WLOL is in the middle of the biggest shipping lanes in the world!

Unlike a lot of shipping companies, WLOL is based in Hong Kong so they’ve built a big business moving big containers between mainland China and Japan, the world’s second and third-biggest markets. China alone accepted delivery on 1.5 BILLION tons of bulk cargo last year, so WLOL has the inside track on about 1/3 of all global shipping right there.

As it is, WLOL is scoring plenty of 7-figure contracts to ship everything from steel to grain to Asia’s ever-hungry markets.

Take yesterday’s $2.88 million charter to move steel from the Black Sea to the Far East. (Source)

To better fulfill the demand of the cargo owner, the company chartered in a 57,000 DWT bulk cargo vessel from a European ship owner to carry the contracted cargo, it took less than two month to carry out the contract and earned US$ 2.88 Million in revenue.

“We are very pleased to enter this contract in such a market downturn,” Ms. Xue Ying , CEO, said. “Shipping capacity has continued to increase in recent years while cargo transportation demand is still depressed. The signing of this contract reflects our high-level operation and wide client base. We will not rule out acquiring more large capacity vessels to meet our customers’ changing and various transportation needs.”

M/V Fon Tai will carry the contracted cargo. Fon Tai will leave Rizhao, China , load the cargo in Vancouver, Canada , call port at Singapore for bunkering and then discharge the shipment in the ports of Vizag and Kolkata in India .

“We are very pleased to provide our high quality transportation services to Viterra,” Ms. Xue Ying , CEO, said, “We deeply understand our customers’ demand on fast, safe and stable shipping services, therefore, we continue to optimize the fleet structure, improve the service procedure and upgrade the business management system. We will continuously advance our service quality to meet our customers’ changing and various transportation needs.”

These aren’t long-term deals that tie up ships for years at a time. These numbers represent one voyage for one WLOL ship. Multiply that by the company’s fleet of 20 vessels and 6,500 cargo containers to get a better sense of the money we’re talking about. (Source)

Even in this “difficult” shipping environment, WLOL is booking $14 to $15 million a quarter. (Source)

WLOL is trading for 77 cents on the dollar!

WLOL’s fleet is worth $95 million and the company is holding another $11 million in current assets — $4 million of it in cash. Granted, those ships didn’t finance themselves, so there’s significant long-term debt on the table. But with only 195 million WLOL shares on the market, it looks to me like this company is trading at barely 0.77 of the book value of its assets.

Bottom Line: Traders launched an avalanche of bids on WLOL right after Thanksgiving when shares were stuck at $0.28 and the imbalance between book value and market cap was even greater.

A full 94% of all WLOL shares that moved in the last year changed hands in the last 3 weeks, so this stock is definitely in play.

Now the trading’s starting, so load WLOL up and get ready for action!