Gemini Group Global (GMNI) Stock To Get Lit Up?

Landing in inboxes shortly after yesterday’s close, the promotional campaign has officially begun for Gemini Group Global Corp. (OTC PINK: GMNI), a development stage company dedicated to capitalizing on the growing vapor and e-cigarette market.  Shares of GMNI stock started to see some trading activity as of last Friday with roughly 500,000 shares now having changed hands between 0.50 and 0.05.  Although the love for paid promotions has become more of a hate, in terms of penny stocks to buy when the market opens, the track record shows that no one but the hiring third party owns shares less than 0.03. 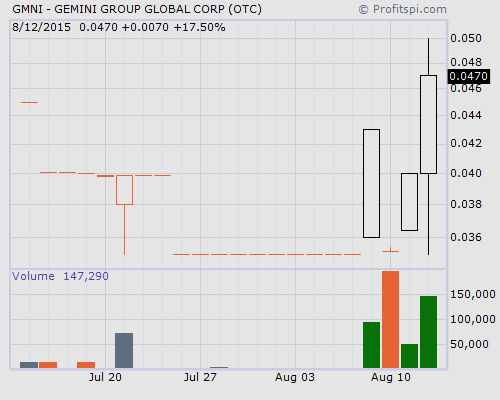 Since the dawn of marijuana legalization being on the ballot of Colorado and Washington State, a number of companies have been shifting their efforts into either marijuana cultivation and product development, or into the more socially acceptable “vapor” product line.  The same can be said for Gemini Group Global who shell has switched directions more times in the last 15 years than a woman getting dressed for a dinner date with the in-laws:

News should be available before the end of the week to help promote GMNI shares since the last announcement, June 23, stated how the Company executed a Product Distribution Agreement with Royal Vapour, LLC, a California-based manufacturer, marketer, and distributor of premium e-liquids for electronic cigarettes and vaping.  While there’s dozens upon dozens of competitors in the sector, to see something pop up about another distribution deal or even sales for the month ended July 31, something other than “GMNI – A Hidden Gem!” is going to be necessary if buyers are going to do anything more than flip it.

A very interesting point to consider comes from the Mar 31, 2015 Quarterly Report which states that of the 329,500,010 shares issued and outstanding, 307,000,000 are restricted (which in reality means pretty much nothing).  Other penny stocks like UVND and EKCS are much better bets for those playing low floats, but today’s action at the open, for sure a gap above 0.05, should provide for ample opportunity to recover some of the $10,000 being paid to promote it.

How GMNI gets accepted at the bell will be a determining factor as to whether letting the gap get filled or waiting for the promotion to end before deciding to seek an entry point.  One point worth noting for those who think there really is only 22.5 million shares in the float would be to sit back for 10 seconds, see what the investors relations page of Gemini Group Global has on it, and then ponder what this statement really means before buying GMNI stock:

“Gemini Group Global Corp. has issued a sizable amount of shares of the company to Royal Vapour along with a commitment of raising up a sizable investment into the new company line. The funds would be for growing the business in the categories above.”