Golden Edge Entertainment (GDEE) Is Worth Every $.05

Monday marked the inaugural trading session for traders buying penny stocks on confirmed pump and dumps from another APS look-a-like, EquitiesThatSoar.  Alerts went out shortly after the opening bell on Golden Edge Entertainment, Inc.(OTC PINK: GDEE), an assetless “diversified entertainment company” that spawned from the bankruptcy of a failed organic spice selling company, Spicy Gourmet Organics, Inc.  As expected, the session went along as planned, with GDEE shares climbing 0.56 (+90.32%) to $1.18.

With so many SNAFU pieces glued together to make this event take place, the longevity of GDEE stock being an entertaining one to be in seems quite limited. 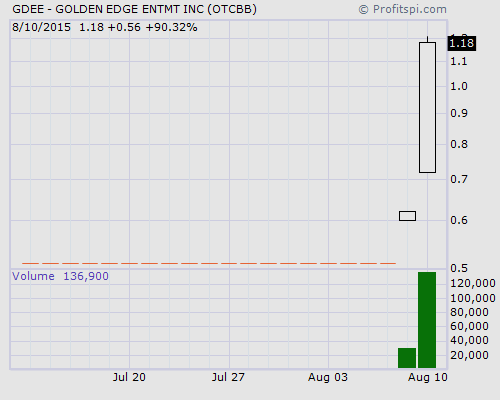 Rather than even entertaining the augmented reality division Golden Edge Entertainment created over the weekend, a look into what traders are really buying (or getting ready to short) seems to be a more realistic approach to analyzing GDEE stock.  From bankrupted Spicy Gourmet Organics, Inc., which sold its assets to Organic Spice Imports, Inc. (ORSI) that changed over to X-Factor Communications Holdings, Inc. (XFCH), what’s really inside the shell of Golden Edge?

The GDEE alert was pretty loud and clear about making sure those who had or had not subscribed to the newsletter got the point:

My awesome stock is here GDEE!

I know it’s long overdue! You want to make profits with a real good stock buy, and the last time I gave you one was months ago!

You’re salivating because you know that last time I did, you made 400% on your investment very fast, turning every five thousand dollars into 20k…. in a matter of weeks!

We are going to do it again, and this time it will be even bigger, much bigger!

GDEE just made it to the stock market! The company is new, hot, and tremendously undervalued.

All the right things are in place for GDEE to go nuts!

I am certain GDEE will pass $1 today. You can count on that. Once you see that happen I want you to take what I am about to say very, very seriously.

GDEE will go on past 5 bucks. In under two weeks.

GDEE is one of the most promising entertainment companies currently trading on the market.

They are involved in everything from productions, artist development, ticketing to augmented reality.

GDEE is taken very seriously by a large number of A-listers: They have done work for Disney, Universal, ESPN, Sony and many individual artists including Jennifer Lopez and Britney Spears.

GDEE is so undervalued now I don’t expect that you will be able to buy share easily. Everyone will be jumping on them today, but if you can…

I highly recommend buying it right now and watching it go up more than 900% in the following weeks.

Within the jpeg disclosure, it states that Topnotch Investments LLC of Tuscon, AZ received $22,000 from Platinum Marketing LLC for releasing the newsletter to subscribers.  A subscriber, you may ask, is anyone who once was subscribed to one of the sister sites of the former Awesome Penny Stocks since the alert not only is a carbon copy of the AREN stock alert layout in every facet, but the wording of the disclaimer is almost exactly identical to how the APS sister sites and APS themselves used to issue theirs when operational.

Realistically speaking, augmented reality aside, GDEE shares are likely to take the course other high priced pump and dumps like NuGene International, Inc. (NUGN) and SolarWindow Technologies, Inc. (WNDW) have taken. Since it was shortly after the SNPK pump when APS broke off into two simultaneous pumpers, seeing GDEE run in the shadows of AREN, albeit with less volume, will help allow for all of the 5,000,000 $0.05 shares to be handed over.