HomeAim High Profits News Two Of Our Picks Lead The OTC Monday, Is GCEI Next?

Two Of Our Picks Lead The OTC Monday, Is GCEI Next?

Global Clean Energy, Inc. (GCEI) is at the forefront of global initiatives to reduce greenhouse gas emissions and lower the dependency in North America and Europe on imported oil and natural gas, having proprietary and innovative technologies for clean coal and renewable energy and international partners in business, university, consulting and engineering. Global Clean Energy’s focus is organic waste recovery with their two developed complementary technologies to salvage and reform waste from a variety of sources to produce a variety of clean energy byproducts.

With Applied DNA Sciences (APDN) and Save the World Air (ZERO), two of our website picks, leading the OTC and gaining 332% and 426% respectively, GCEI stock could be the next long-winner.

GCEI Has Run From Under A Cent To Over A Dime

Yes, the pick is here so the hundreds of hourly emails can stop now! 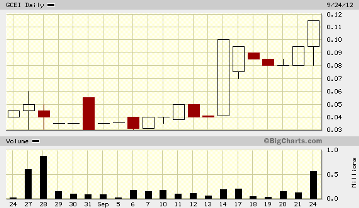 We wanted our subscribers to know about GCEI well before tomorrow’s opening bell so that you know well in advance what we see as a possible 5-bagger or better.

In August, we saw the headline blip by one day:

Since then, the shares seem to have just taken off already to what is looking like a strong run ahead based on their next announcements.

GCEI started building their 15-20 Ton per Day Gasification System and then set up a Government Grants Division. This is the same company that cleaned up a huge coal site for one of the U.K. coal sites and were supposedly offered a ridiculous amount from one of their country’s top oil companies, actually, one of the biggest in the world.

GCEI has these two things that the oil rush in North Dakota is creating even more of a market for them. Their Airpump™ was used in Pontifract, South Yorkshire, UK, where this lagoon left over from UK Coal was over 200 ft deep with almost 4 million tons of coal slurry.

And who did they call, GCEI. Once emptied, this site will be redeveloped into a residential, business and commercial park. (UKC News Aug 2008)

Not only can they handle coal, but they just set up the grants division because they can basically turn anything unwanted into fuel with thier R.E.S.C.U.E™ — Reforming Environmental Salvage into Clean Usable Energy

Global Clean Energy Inc., in collaboration with Concordia University and Cascades Engineering, a division of Cascades Canada Inc., one of Canada’s largest paper manufacturers, have spent four years researching and developing technology to recover and reform synthetic fuel from waste containing a wide variety of carbon byproducts. The result was the filing of two proprietary patents:

· the AirPump™ that utilizes Vortex technology to efficiently separate waste and recover carbon from extracted material; and
· a hybrid steam gasifier, the G2G Steam Reformer, a world’s first in gasification technology.

Both technologies, with accomplished proof-of-concept, constitute the foundation of GCE’s mission: to produce clean energy by clean, sustainable methods and lead an industrial revolution in waste management and disposal.

On December 9, 2009, the City of Salaberry-de-Valleyfield announced field testing of the Company’s gasification technology to convert municipal solid waste, or MSW, and industrial waste to synthetic gas and biodiesel. A portion of the funding from this initiative came from the Canadian government through the Green Municipal Fund of the Federation of Canadian Municipalities.

This project was designed to significantly reduce the amount of waste the city sends to landfill and to generate substantial savings on transportation and disposal of waste. The Company expects that ongoing collaboration between the Company and the city will also result in a new source of biodiesel to fuel city installations and municipal vehicles at a reduced energy cost.

Phase One of the project was completed successfully with the G2G gasifier producing syngas from municipal solid waste, industrial and construction waste, plastic, rubber, coal, and organic waste.

The gasification tests and syngas collection were carried out by Janory Capital Corporation on a contract basis. The modifications to the gasifier were conducted by JR Mechanique of Salaberry de Valleyfield. The gases were analyzed at CanmetENERGY a division of Natural Resources Canada, Government of Canada.

Phase Two of the project for which the Company prepared preliminary contracts and design work and awaiting final authorization to proceed from the Green Municipal Fund of the Federation of Canadian Municipalities, will gasify 5,000 metric tons of MSW per year. The Company planned to work with CanmetENERGY on the design of the Phase II unit as they have been working for over 20 years on fluidized bed gasification and have fully equipped research facilities to offer the Company. Construction and installation of the Phase II unit were to be carried out with JR Mecanique who are experts in piping and manufacturing of heavy industrial equipment for volatile gases.

Phase Three, if it proceeds, will establish a gasification plant capable of processing 30,000 metric tons of waste per year, or more depending on the feedstock, including a regional center for the sorting of MSW.

This venture afforded the Company a unique opportunity to advance the Company’s research and development in an industrial park with a continual supply and variety of feedstock. Being one of the first of its kind, it will also function and develop as a prototype for the management of MSW, which is still being defined by an evolution of government policy.

Salaberry-de-Valleyfield’s need for small-scale, local waste management accurately mirrors the needs of other municipalities and offers a valuable opportunity to demonstrate how gasification works and how local biofuel production can be incorporated into future public works and urban planning projects.

The Company believes that a functional 125 mtpd gasification plant has enormous commercial potential. Beyond managing MSW, the same gasifier can be commissioned for uses in any energy reformation application involving carbon-rich feedstock, such as coal, biomass, algae and so on.

Translation: Big things are on the horizon for this cleantech company. Be ready to profit with GCEI and start considering this company! To read more on the company visit their website at: www.globalcleanenergy.net

GCEI looks strong from its position and could easily come out to be a 5-bagger with just under 32 million in the float.