HEMP | How High Will Marijuana Stocks Run In 2015?

The OTC Markets kicked off 2015 with a “Nice Dreams” theme to it with marijuana penny stocks greening the way and capturing the majority of trading activity. Kirin International Holding, Inc. (KIRI), a company develops residential and commercial real estate properties primarily in Xingtai City, Hebei Province, China, got the call from StockMister’s group as a Momo pick to start of the year with some big profits to be had and a good way to add a quick notch in their penny stock alerts belt. However, in an almost déjà vu start to the year as traders saw last year with pot tickers, the soon to be broadcast network coverage on the cannabis industry and the publicly traded companies involved in it, there’s a bunch of tickers that are due to get hot again now that 23 states have legal marijuana markets.

With California having first legalized medicinal marijuana nearly 20 years ago, Maryland, Minnesota, and New York were among the latest of the total 23 states to adopt the initiative and begin collecting tax revenues because of it. Although only Colorado, Washington, Oregon, Alaska and Washington, D.C. will allow for possession of a small amount of recreational marijuana, it’s only a matter of time before both medicinal and recreational marijuana availability begins to expand even further.

Last year this time, when Colorado and Washington pioneered the recreational cannabis movement, investors flocked to buy shares in any marijuana stocks, especially those that were penny stocks. As can be seen from the graph designed by John Tommervick over at JointIndustries.com, for the price of what a decent quarter bag used to go for, any investor could have made a fortune on marijuana related penny stocks: 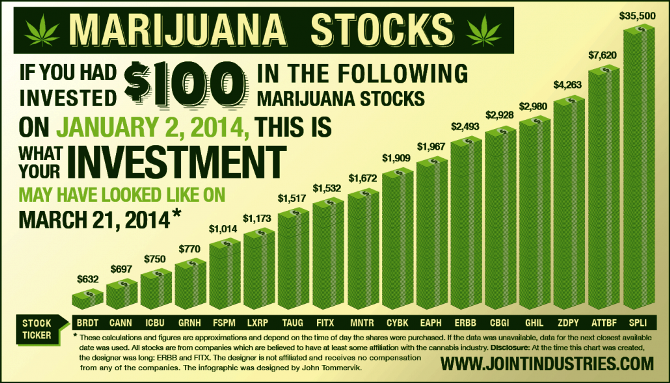 It’s amazing what $100 could have brought you a year ago and, although we’ve been covering marijuana related penny stocks since we launched AimHighProfits, picking a long shot now is not as easy as it was before. While the 10-bagger, short-term gains might not be attainable this time around, here’s a list of what is going to be worth flipping:

Those 9 marijuana related socks were among the top 10 traded penny stocks from Friday, but here’s a few more which could easily heat up (in no particular order):

With all of these players in the cannabis industry offering the potential for gains (and losses) with marijuana stocks heating up again, it’s unlikely that it will be as profitable this year as it was last. Even though throwing a dart at a board with these tickers is as likely to land on a winner as spending 2 or 3 hours of research is, finding new players in the industry like HempAmericana, Inc. (HMPQ) and those shell corps that revive themselves with updated Nevada filings like most did last year.

For those looking for players that aren’t OTC listed penny stocks, Cannabis Sativa, Inc. (CBDS) will surely be a powerhouse in the marijuana sector for investors. Just prior to the new year, former U.S. Senator and 2008 Presidential candidate Mike Gravel was announced as the new CEO of KUSH, a subsidiary of the marijuana focused company that produces cannabis-infused products for both recreational and medical use. Lead by former New Mexico Governor Gary Johnson, CEO of Cannabis Sativa Inc., CBDS stock reached as high as $9.25 on Friday before closing at $9.20, up $2.30 (+33.33%).

Another one is Lifeloc Technologies, Inc. (LCTC), a Colorado manufacturer and exporter of professional alcohol breathalyzers which, in September, 2014, was awarded $250,000 grant from the Colorado Office of Economic Development and International Trade to accelerate its development of the world’s first Marijuana Breathalyzer. Although it is a low volume ticker, LCTC stock closed Friday at $15.00, up $3.00 (+25.00%).

If you’re looking for marijuana stocks not listed on the OTC, check out GW Pharmaceuticals PLC (NASDAQ: GWPH) and Insys Therapeutics Inc. (NASDAQ: INSY). While these two big board tickers offer a lot more than just marijuana products in their pipelines, they have the means by which to support their efforts in the sector.

Kirin International Holding, Inc. and its subsidiaries, Variable Interest Entities and their subsidiaries, are engaged in the development and sales of residential and commercial real estate properties, and development of land lots in Xingtai city, Hebei province, People’s Republic of China.

Click here to view the SEC filings for KIRI.

KIRI was one of the hottest penny stocks on Friday, but heading into the first full trading week of 2015, marijuana stocks are going to be the players. With many new investors hoping to capture the gains that those who had the initiative to buy pot stocks last year this time did, dollar volume could return to last year’s levels in no time. While we’ve lost Growlife Inc. (PHOT) due to the SEC suspending it for insider dumping, the marijuana gorillas like HEMP, MJNA and CBIS are sure to be favorites among those trading.