HomeAim High Profits News SVEN | Could Superior Venture Be A Blockbuster In China?

SVEN | Could Superior Venture Be A Blockbuster In China?

If you like penny stocks and companies looking to dominate in China, then you may want to pay close attention to Superior Venture Corp. (SVEN) when they IPO. The Company just acquired Ilustrato Pictures Ltd. who are planning to dominate the Chinese film industry and worldwide film sales with guaranteed money. When China and the word “guaranteed” are coined in the same sentence, you have no choice but to see if SVEN stock is set to be a blockbuster or a complete bust. It might nit ever evolve to anything, but since I already started writing, deal with it.

Click HERE To Make Sure You Don’t Miss Any Of Our Breaking Alerts!

When reviewing the history of SVEN stock, we got excited when we saw that it was originally started by Michael Moore. Thinking that, since Harry Sutherland, an IMDB verified Producer, and Brian Hammond, bought 75 million and 275 million shares, respectively, off Michael Moore for $0.01 each, WTF could these two Vancouver BC movie buffs be up to.

However, when it was discovered that this Michael Moore who filed the S-1 for Superior with the intentions of  selling wine varietals, is a chef and Sommelier from Colorado, we adjusted our excitement level to just one thumbs up rather than two. So why’s SVEN stock worth watching? Harry Sutherland and over a billion Chinese people — that’s why. 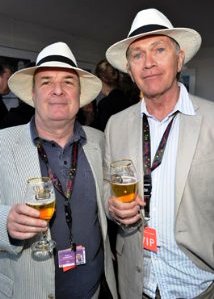 Harry and Brian brought their Ilustrato Pictures Ltd., a Canadian company created for the development of feature theatrical films to be financed and distributed domestically by Chinese production companies, into the SVEN shell by way of a share exchange agreement which was announced after the closing bell Friday. (see here) The parent-subsidiary relationship is set to catapult the years Ilustrato Pictures spent developing a network in China to integrate into the Chinese business fabric so that they could conduct business there. I know, right; Blah, Blah, China this and China that.

The difference is Superior Venture has what you could consider a “golden ticket” based on their claims that “All projects will be guaranteed domestic Chinese box office distribution before actual production starts.” They also claim that Ilustrato Pictures is set to make near term revenues in China and from worldwide film sales (Chinese box office, dvd, pay per view, etc.) which they will repatriate the earned income portion to the public company via its wholly owned tax exempt offshore holding company affiliate. Bit too much information, but what do would you expect from two guys who went to Contract Signing Ceremony at the 2nd Beijing International Film Festival as if they were “Goodfellas” lapping it up in Cannes.

With 300 to 400 new multi-screen cinema complexes built in China each year, is it possible SVEN stock could be a blockbuster?

Superior Venture Corp., through their parent-subsidiary Ilustrato Pictures Ltd., is in the business of developing feature theatrical films to be financed and distributed domestically by Chinese production companies, and for international release.

Click here to view the SEC filings for SVEN.

Bottom Line: SVEN may result to be the worst penny stock of all time or the beginning of the newest Universal Pictures (however you say that in Manadarin). It was too late to stop writing about SVEN stock once we began the due diligence on it and we thought it would be a shame to let all that good data go to waste by just closing the tab.