Monday offered some exceptional opportunities for penny stock traders to record trades that were worthy of a replay. Traders who took our HCTI and WOGI articles seriously yesterday were able to post gains worth 110% and 32%, respectively, while others jumped all over no news runners like San West Inc. (SNWT) , up 72% from the open, and Puget Technologies Inc. (PUGE) , up 47% from the open, but none were able to record the percentage gain and dollar volume combination that LifeLogger Technologies Corp. (LOGG) was able to achieve. Although LOGG stock also ran, up 21% with $1,153,733 traded, without any news or financial filings, traders are very well aware that no ticker ends a trading session as the top penny stock traded without some assistance from elsewhere. 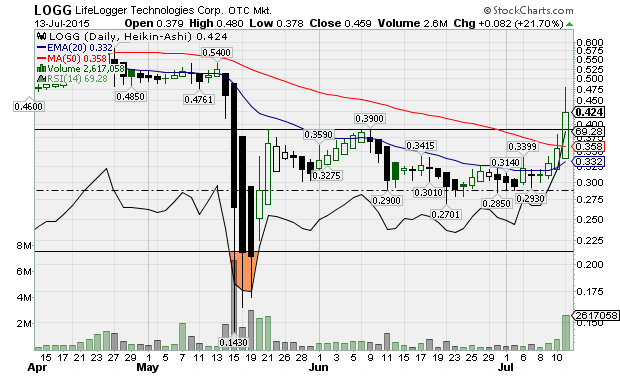 For those who are unaware of what LifeLogger is about, think GoPro Inc. (GPRO) without the cameras and the distribution channel and you’re pretty much on the money with the concept. The last news issued by the Company was over 4 months ago when they simply were informing the trading community that they had received notice of approval from OTC Markets Group, Inc. to continue trading on the OTCQB Marketplace, effective February 25, 2015.

Looking closer into the filings of LifeLogger you find both an Investor Presentation and their Q filing for the three months ended March 31, 2015 – both of which provide reasons to have LOGG stock on the radar moving forward.

Within the Investor Presentation the Company provided on May 19, anyone not knowing LOGG was pumped before would look at their two products under development, cloud based software accessible and compatible with any Android/iOS device and their True POV wearable video camera and think they found the next GPRO. That theory can be supported even further, to an extent, when you see that 82,270,503 of the 125 million shares authorized are already issued and outstanding and that they have no debt worthy of note ($55,392 as of March 31, 2015) on their balance sheets.

So how does one take two concepts under development and get them to market with little to no cash (slightly less than $0.001 per share outstanding) and only a few million shares that could be leveraged in the form f debt to get things moving? Lest we forget this is OTC land where, a few years ago, SEFE Inc. (SEFE) made tens of thousands in profits for traders who timed that right based on their plan to capture lightning and convert it into sustainable energy.

While not being able to dispute the bullishness LOGG shares showed on Monday, the two SA articles are still floating around out there which question, among other things, how $118,000 can be spent on R&D while there are no patents under the belt of LifeLogger Technologies. That one point is disputable when reviewing the planned revenue stream which aims to provide their App being developed at supporting 3rd party cameras with advanced portions of the App billing monthly subscriptions together with their hosting/storage services to be offered. This is more than likely stage 1 prior to their ever being a stage 2: the patent filing and development of wearable camera devices with true POV capabilities.

Until the day comes where an actual app is downloadable on either of the software platforms to be targeted, LOGG stock will remain a hit-and-miss play which will reward timely plays and penalize long believers. Repeating what was already mentioned above: no penny stock ever ends the trading session as the top traded one without a little bit of help from elsewhere.